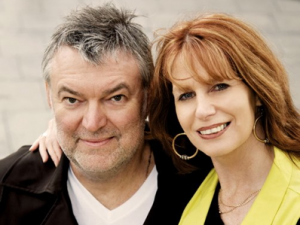 Jeff Crabtree is an award winning composer, producer and musician who specializes in the diametrically opposed fields of acid gospel blues and film scoring. He is equally at home on the stage or in the recording studio. He has performed in large and small venues all over the world in the last thirty-five years. He has production and songwriting credits on a truckload of recordings including two live albums in his blues alter ego state. His friends describe him as a musical alchemist – a magician of sound.

Julie loves being around creative people and she is passionate about seeing them become as emotionally and creatively healthy as they can be. With a husband and daughters who are creative – her life has been full of constant surprises. Currently Julie works as a psychologist in private practice and she specializes in issues associated with creative artists and performers.

Her desire to see creative people become the best they can be has led her to undertake research into creativity and mental health through one of Sydney’s major universities. For those who are interested (and she would want you to be interested) her research title is: Cognition and Temperament in Creativity and Psychosis Spectrum Disorders’. This simply means that she will be looking closely at the unique ways that creative people think and what makes them distinctly creative.

Jeff is a speaker at conferences nationally and internationally and is often asked to speak on the arts and creative arts practice, where his unique observations are peppered with hundreds of true stories from a lifetime of performance, teaching, travel and creative production. Honest, direct and with a wry sense of humor, his presentations are full of comedy as much as they are insightful and original.

Both are passionate advocates for the power of the arts to shift the way we see and think, and how this power can change cultures and societies. Together they currently travel within Australia and overseas delivering seminars on ‘Living with a Creative Mind’.

Their fascination for understanding more about creative people developed over nineteen years when both Julie and Jeff were heading up educational institutions. Jeff was principal of a tertiary arts college while Julie pioneered and managed a community based training college. The creative arts students would invariably find their way to her counseling and support services. This led to their desire to find out how to better assist the creative community. They also delivered sessions to the creative students on how to live with a creative mind. These classes became an early part of the genesis of the book.

While this is Jeff’s first book, it is not his first foray into writing. He is currently experimenting with scriptwriting in addition to his work as a composer for screen.
Along the way he has also earned a Bachelor’s degree in English Literature and a Master’s degree with Honours in Music and Cultural Studies.

Before her involvement with creative people, Julie worked as a psychologist in a major hospital, a major Australian bank (where she researched and initiated a program for hold-up victims) and in various other settings where she assisted trauma victims.

Together they have co-written Living with a Creative Mind and are both directors of Zebra Collective: a consultancy aimed at helping organisations attract and retain successful creative teams. Zebra Collective combines media and music production, with a creative consultancy that includes people management and mentoring.

2 thoughts on “About the Authors”

Our cause is the cause of creative people everywhere, that they be understood, encouraged, nurtured and liberated. We seek to help them lead creative lives, but not just in their productivity.

It is the stubborn, determined, dogged and persistent people who actually succeed in the creative fields. They ferociously refuse to give in to entropy and to the temptation to have an easier life. They create not because they can, but because they must.